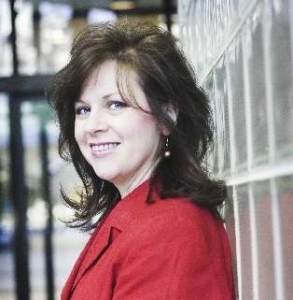 When I decided to write a book about a bull rider, I needed an indoor, every weekend rodeo to fit my storyline. I found The Fort Worth Stockyards online and learned it had lots of history, but I’d never been there. Last Spring break, we made the trip for research.

My husband and son tackled The Cattlepen Maze first thing. This is a human sized maze modeled after cattlepens with rubber rats strategically placed. It didn’t take them long. My son wanted me to do it. I walked and turned, and walked and turned, getting more and more lost as I went. Smart aleck signs ask, “Are you lost?” or “Haven’t I seen you before?” while family members on the observation deck try to help you out and often get you even more lost.

You have to find punch machines in the shape of each letter of the word maze. It took forever. It seemed like forever anyway. It was hot and there’s no breeze in the maze. I found all the letters and punched my card, but I couldn’t find the exit. I found the entrance 3 times, but not the exit.

Finally, I found my son and said, “If I find the entrance again, I’m taking it.” A few minutes later, we found it again and we took it. If it hadn’t been 88 degrees, it would have been fun.

We walked the brick streets lined with copper engraved plaques that make up the Trail of Fame honoring those who earned their spurs contributing to the heritage of the old west. I learned that over ten million bricks paved the original 2600 cattlepens. The brick gave the Longhorns steady footing and kept them clean for their final trip to the meet processing plants. Poor doomed critters.

I guess that made us hungry. We searched out The Cattleman’s Steak House since I wanted some of my characters to eat there. My husband said the steak was awesome. My grilled shrimp was yummy. After our meal, we witnessed a cattle drive right down the middle of the street. Texas Longhorns are much bigger in person and their horns are huge, up to a six feet span.

I expected the drive to be like the running of the bulls and was kind of nervous standing on the sidewalk. But they don’t run. The Longhorns meander along their familiar path, never straying, as if they have all the time in the world. That’s the way it was back in the Chisolm Trail days too. Why? Longhorns can’t run long, they might stampede, and if they had ran, the owners would have lost money because they’d have ran meat off.

I toured the Stockyard Station Gallery and The Texas Cowboy Hall of Fame, where everyone from George Strait to Lane Frost is honored. I spoke to Julia Buswold, Executive Assistant there and learned how to get a cowboy inducted into the hall of fame. I thought that might come in handy for book 2. My husband and son shopped and witnessed a staged gunfight, but I missed it.

Then I headed back to the hotel and went to the Cowtown Coliseum for a meeting with Director of Sales, Dee Dee Barker-Wix who’d agreed to help me out with the facts about The Stockyards Rodeo. Cowtown housed the first indoor rodeo in 1918 and introduced bull riding in 1934. I took numerous pictures of the arena and The Texas Rodeo Hall of Fame, then pummeled Dee Dee with questions.

My husband and son met me for our first family rodeo. The patriotism impressed us with Lee Greenwood’s rendition of God Bless the USA as a cowgirl carrying an American flag rode a white horse around and around the arena, faster and faster as the music reached a crescendo. We laughed at the calf scramble where kids from the audience are invited to try and get the ribbon off a calf’s tail. A sheep faces the same fate in the sheep scramble. While the calf gave the kids a run for their money, the sheep went straight to the exit gate and waited for it to open while a kid grabbed his ribbon.

Calf roping, steer roping, team roping, and finally. . . I definitely felt a connection with my heroine in book 1. I cringed through every bull ride and worried when the cowboys fell off. My son asked if he could be a bull rider when he grows up. I cringed.

The Stockyards offers a rip-roaring good time. We didn’t have time to do half the things I wanted to do like the stage coach ride and the train ride. They even have hotels in the Stockyards. The Stockyards Hotel at $319 for a standard room, Hyatt Place at $142.00, Miss Molly’s Hotel at $125.00. We stayed at the Best Western five miles away. 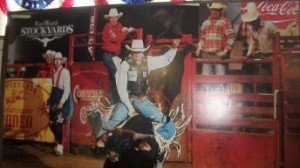 I got lots of fodder for my rodeo series and searched through all my pictures numerous times while writing the books. All of the bull riding pictures I took were too far away, but then I found that great shot of the bull rider. Wow, how did I take that shot? Then I remembered, it’s a poster in the coliseum lobby.

Visiting The Fort Worth Stockyards is like taking a step back in time. The history fit my series perfectly. Just walking the brick-lined streets that day got my creative juices flowing. The hero in book two is a rodeo clown, only now they’re called bull fighters. In book three, the hero is a rodeo announcer and the heroine competes in barrel racing. It was a fun series to write and I’m always a little sad when I finish a series. But The Fort Worth Stockyards just might find its way into another book someday. 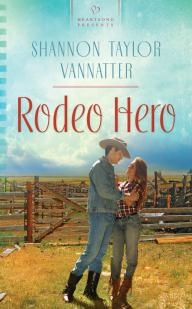 Kendra Maddox isn’t thrilled when Stetson Wright steps in to help fend off her overanxious date at a wedding. A new Christian, she’s struggling with a promiscuous past, and Stetson’s firm belief that true love waits only makes his gallant attempt to defend her honor even more unwanted. Then her friends continually push her and Stetson together. . .but can’t they see she’ll never be good enough for him?

Stetson doesn’t need any distractions. And Kendra Maddox is definitely a distraction. From his job as the new youth director at church to moonlighting as a rodeo clown, Stetson has other things to think about. Finding the perfect wife will have to wait.

When Stetson saves a prominent bull rider, he makes headline news, and Kendra’s ad agency is hired to promote the rodeo hero. Attraction simmers, but will they be able to accept each other for who God sees?

The first book in her Texas rodeo series, Rodeo Dust is available through Heartsong Presents. Rodeo Hero and Rodeo Ashes release in March and August 2012. Her books are available at amazon.com, christianbook.com, and readerservice.com. Learn more about Shannon and her books at http://shannonvannatter.com and check out her real life romance blog at http://shannonvannatter.com/blog/.

Don’t forget to leave a comment by next Friday, April 13th, on this post to be eligible to win a copy of Rodeo Hero.

This entry was posted in Fort Worth Stockyards, Shannon Taylor Vannatter. Bookmark the permalink.