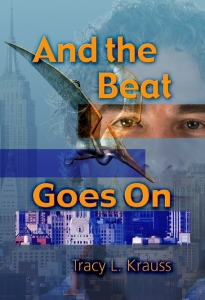 Today I am happy to showcase another John316 friend, Tracy Krauss, and her new book.

“Why I Wrote AND THE BEAT GOES ON” by Tracy Krauss

Essentially, And The Beat Goes On is a commentary on the Creation vs. Evolution debate, while at the same time a redemptive story about one man’s inner struggles with faith. I became interested in the topic for the first time when I became a Christian and was faced with the huge discrepancy between what the Bible had to say about the origins of the universe and what mainstream scientific thought had to say on the subject. This led to much reading and research, which I later put into use when I decided to homeschool my own children. When I decided to write the book, I had already finished another novel called Play It Again – the story of an ex rock and roll junkie and a stuffy accountant whose one night stand has complicated outcomes and eventually leads them both to redemption in Christ. The protagonist’s son, Mark – a studious eleven year old who likes fossils and arrowheads – seemed like the perfect character for the this next novel. (Thus the tie in with the musical reference in the title) I am also a long time Sci-fi/fantasy buff, so I wanted to somehow include some references to the Nephilim – those mysteriously wicked people who lived before the flood.

My hope is that readers will first and foremost enjoy the book as a good story, for that is what fiction is supposed to be. I do not pretend to be an expert on the scientific aspects of Intelligent Design, but I have tried to include enough information to at least whet the appetites of those who are interested, without coming across as pedantic or bore readers with long scientific explanations. Many issues raised are left somewhat open ended, since it is my belief that intelligent people need to make up their own minds about what they believe, not just take someone else’s word for it. Also, I wanted to highlight the grace of God and point to Jesus as the answer to even life’s most difficult questions. The book is a mystery, a suspense story, and also a romance. In the end, I hope readers will be entertained, but also left pondering the bigger questions of the universe.

Tracy Krauss is a high school teacher by profession, and a prolific author, artist, playwright and director by choice. She received her Bachelor’s degree from the University of Saskatchewan and has gone on to teach Art, Drama and English – all the things she is passionate about. After raising four children, she and her husband now reside in beautiful Tumbler Ridge, BC where she continues to pursue all of her creative interests.

This entry was posted in And the Beat Goes On, Tracy Krauss. Bookmark the permalink.