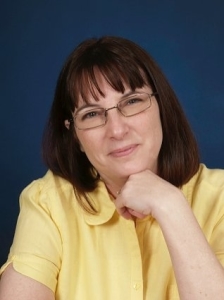 Today we will meet author Fay Lamb by first having her answer some questions, then she will tell us a little more about her recently-released novel Because of Me

1) Tell us a little about your novel, Because of Me.
I met Michael Hayes one cool autumn day while sitting on my porch. Michael, unshaven, his hair a little scraggly, and his young face filled with tension, began to tell me his story. “There’s a young boy, Cole. I’m not his father, but he’s definitely on this earth because of me. I allowed something horrible to happen to his mother, but I still love her. I despise the kid, though. I’ve forgiven another for so much more, and Cole’s only fault is that his father is the man who took everything from me. How can I learn to love this child and protect his mother from the man who can again take her from me?”

And as easily as Michael entered my imagination, he turned and walked away. Michael’s revelation brought forth layer after layer of plot, and my novel, Because of Me was born.

2) What motivated you to write it?
Deep down, I think this story came about because my two boys were like Cole. In fact, my youngest son—the one who really never had the favor of his natural father—his middle name is Cole. My boys needed a man in their lives who would love them unconditionally, who would nurture and care for them, and show a Christ-like example of a true father. My husband, Marc, stepped into that role when my children were six and four years old, and he’s never let those boy think for a moment that he wasn’t as much their dad as the man they share DNA with.

Still, there’s so much more to Because of Me. It’s a story of forgiveness, the depths of which some may never experience, and the story will truly renew your faith in the Lord’s design for us. After all, God is always in the details whether you recognize it or not.

3) What is the main message you hope your readers will take away?
That no matter how badly we mess up or how much comes upon us, God is always nearby. I truly believe Paul didn’t idly pen the words of Roman 8:28. When the Scripture tells us “all things work together for good to them that love God, to them that are the called according to His purpose,” the Lord is telling us that it isn’t just the good in our lives that will work together for good. Only our awesome, loving Father can make provisions for us when we make mistakes. Only He knows the thoughts He has toward us, as Jeremiah 29:11 says, and there again, he promises an expected end, a future of hope.

4) Which character did you most enjoy creating and why?
A very hard question for me. This story has some truly memorable characters—not just the hero and heroine, but secondary characters. I absolutely love Michael Hayes and Isabel Putnam, the love of Michael’s life. They’re flawed, but they endure some mighty big conflict.

However, my favorite fellow in Because of Me is Ted McGillicudy. Ted kind of sneaked up on me and inserted himself in the story. He’s a gruff old country boy, and Ted knew that for Michael to eventually love Cole, he’d need an example of a father in his life. Ted watches out for Michael, accepts him, and for Michael, whose father left him when he was very young, Ted fills a void in his life. And Ted, he spouts off some one-liners that will take you by surprise.

5) Which character do you think your readers will most relate to and why?
Definitely, Michael. He’s lost so much, and he returns after being in prison and away from his hometown for several years. He is shocked to find that the woman he loves isn’t alone any longer, and he has issues to deal with before he can win back her heart. Michael struggles through those issues, but he clings to his life verse: Job 13:15: “Though He slay me, yet will I trust in Him: but I will maintain mine own ways before Him.”

BIO
Fay Lamb works as an acquisition/copyeditor for Pelican Book Group (White Rose Publishing and Harbourlight Books), offers her services as a freelance editor, and is an author of Christian romance and romantic suspense. Her emotionally charged stories remind the reader that God is always in the details. Because of Me, her debut romantic suspense novel will be released on February 3, 2012, by Treble Heart Books/Mountainview Publishing.

Fay has a passion for working with and encouraging fellow writers. As a member of American Christian Fiction Writers (ACFW), she co-moderates the large Scribes’ Critique Group and manages the smaller Scribes’ critique groups. For her efforts, she was the recipient of the ACFW Members Service Award in 2010. In 2012, Fay was also elected to serve as secretary on ACFW’s Operating Board.

Fay and her husband, Marc, reside in Titusville, Florida, where multi-generations of their families have lived. The legacy continues with their two married sons and five grandchildren. 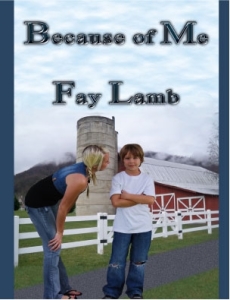 Because of Me:
Issie Putnam’s life took a detour the night she was raped at gunpoint in front of her fiancé, Michael Hayes. Instead of marrying Michael, a promising young investigative reporter, Michael, along with the man who attacked her, and the man who held the gun on Michael, are imprisoned for conspiracy to assassinate the local district attorney—a crime Michael was trying to expose but had no intention of committing. Issie’s name is ruined, she lost her perfectly-planned future, but she gained Cole, her son—born of that rape.

On the eve of her attacker’s parole, Michael, already released from prison, follows through on his plan to return to the small town of Amazing Grace and protect Issie from the madman who promised to seek revenge. There, he meets Issie’s seven-year-old son for the first time.

Can Michael learn to love the child Issie holds so close to her heart? Will Michael be able to protect the woman he loves from the man who will stop at nothing to destroy them all?

This entry was posted in Because of Me, Fay Lamb. Bookmark the permalink.