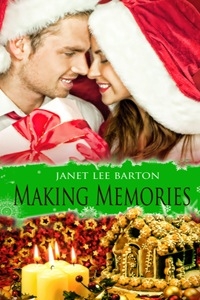 The Third Day of Rose’s 25 Days of Christmas Cheer

Scene from the novella, Making Memories by Janet Barton—is up on the White Rose Press site for $1.00 in their Christmas Extravaganza, I think it will be available elsewhere mid-December

“Men.” Melissa shook her head and grinned. “No telling what they are plotting.”

“You’re right about that,” Amanda chuckled and nodded. She’d seen her dad and uncles pull one prank after another often enough to recognize the signs. “We’d better be on guard.”

Melissa insisted they have a cup of hot chocolate before heading out into the cold night air and Amanda thoroughly enjoyed the next half hour of small talk. She was feeling more and more at home in Oklahoma City and knew a lot of her ease was due to the three people at the table. She sent up a silent prayer thanking the Lord for sending them into her life.

“I guess we’d better be on our way,” Josh said. “We wouldn’t want to be late for Sunday school.”

“No, that wouldn’t be good,” Andrew said. “Especially for me as I’m teaching the class this quarter.”

Melissa retrieved their coats from the closet in the entryway and Josh helped Amanda on with hers before putting on his own.

“Thank you so much for your hospitality,” Amanda said to the Bensons as they all stood in the entryway.

“Thank you for coming.” Melissa gave her a hug.

Andrew cleared his throat and pointed up to the small chandelier hanging above the women.

There, hanging right above their heads was a large clump of mistletoe tied to one of the crystals with a red ribbon. Andrew pulled his wife into his arms and planted a quick kiss on her lips as Amanda watched, slightly bemused. Then, before she realized she was still standing in the same spot, Josh had turned her face toward his and touched his lips to hers in a kiss so light and sweet Amanda almost thought she’d imagined it.

This entry was posted in Janet Lee Barton, Making Memories. Bookmark the permalink.