Welcome to the First Day of Rose’s 25 Days of Christmas Cheer!

Excerpt from A Simple Amish Christmas by Vannetta Chapman, Abingdon Press, 2010.
This book is in my TBR pile for the month of December, so I am getting a head start on it now! If you have ever been away from home and missed loved ones during the Christmas season, this scene will grab your heart!

Annie Weaver threw her coat and scarf into her locker,
slammed it shut, and twirled the lock—once, twice, three
times as Jenny had shown her.

Turning to go, she nearly ran over her best friend.

“Tell me you are not headed out on the floor.” Jenny’s voice
sounded like Annie’s first year teacher—stern and low and
slightly disappointed. Sporting short blonde hair and a figure
even slimmer than Annie’s, Jenny looked nothing like an
Amish schoolteacher.

Blue eyes laughed at her, even as Annie tossed a panicked
look at the clock—six fifty-seven a.m.

Annie’s hand flew to the top of her head and met only a
mass of curls. Searching, she found her nursing cap slid to the
back and side of her head.

Looking down, she realized she’d left it—

Left them both in her locker.

As she turned and fumbled with the combination on her
locker, Jenny re-pinned her nursing cap firmly in place on the
top of her long, chestnut hair.

Annie shook her head. “I was up early enough, but I made
the mistake of turning on the radio. The music reminded me
that it’s December.”

“When I heard the music I realized I hadn’t written home
this week. I thought I had enough time, but then a letter to
my parents was followed by another to my schweschder.”
Annie’s voice trailed off. How could she explain that the
Christmas decorations popping up everywhere were making
her homesick?

Garlands hung from the halls of her boarding house.
Colorful displays crowded the store windows lining her walk
to work. Lights blinked above the streets, and Santas rang bells
at nearly every door.
She longed for the simple celebrations of home.

Annie grabbed her I.D. and stethoscope, allowing her fi ngers
to brush over the engraving, marveling that it bore her
initials.

She had actually earned her R.N. degree. One year she had
studied and earned her high school equivalency, then for two
years she had been enrolled in and graduated from the local
nursing program.

She spun around to face Jenny. “I shouldn’t have spent so
long writing my mamm and dat this morning, but ya—I was a
little homesick because of the holidays.”

“Your mother and dad will appreciate the letter. Why don’t
you stop by my place after your shift ends? I’ll make baked ziti,
a giant salad, and fresh rolls—your favorite meal.”

Annie blinked through the tears which suddenly sprang
to her eyes, accepted the hug Jenny offered, and hurried out
to the floor, glancing again at the clock as she passed underneath
it. 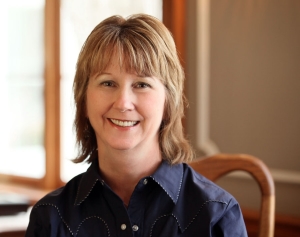 Vannetta Chapman holds a BA and MA degree in English and has published over one hundred articles in Christian family magazines, receiving over two dozen awards from Romance Writers of America chapter groups. Her first Amish novel with Abingdon Press, A Simple Amish Christmas, quickly became a Christian Books Distributor bestseller. Her first Shipshewana Amish Mystery, Falling to Pieces (Zondervan) released in September of 2011 and is also a CBD fiction bestseller. She also writes Amish romance for Harvest House. A Promise for Miriam: Pebble Creek Series will release in June of 2012.

This entry was posted in A Simple Amish Christmas, Vannetta Chapman. Bookmark the permalink.