Anita Mae Draper may not be pubbed in fiction yet, but I think it won’t be long after reading her descriptions of these weather scenes and after reading all the contests she has finalled in! Anita is also very talented in photography, and I am so glad she shared her beautiful Canadian countryside with the rest of us.

She’s also very generous, and has offered to give away a copy of Lynette Eason’s LIS Threat of Exposure to someone who leaves a post on this blog before next Monday. So be sure to let her know how much you enjoy her photos and leave your email info so we can contact you if you win!

It’s almost December and the only reason I haven’t been listening to Christmas music yet is because the weather has been so nice this year. Sure it’s windy out there and we’ve had our share of snow, but a couple inches is nothing compared to the 2 feet we sometimes have by this time. Because our weather is fickle and dangerous, I thought I’d show you some photos and a video of the gamut we can run through each year.

First off are the sundogs which show up when there are ice crystals in the air. Sundogs (also called mock suns) are a phenomena we see several times a winter. They are caused by light refracting through ice crystals – you know, the kind that turn the trees white. Although the twin mock suns on either side are the actual sundogs, the whole thing is commonly called a sundog in these parts much like a ring around the moon is called a moondog. 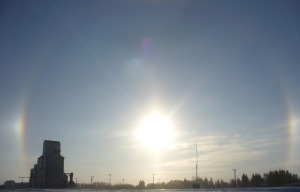 The photo above was taken at approx. 9:30 am on our way to church on Feb 7, 2010, but sundogs can appear throughout the day.

We see other things in the winter, too like the effect of frost on things. One morning, I went out and found the frost on certain items, only. It particularly liked our van antenna: 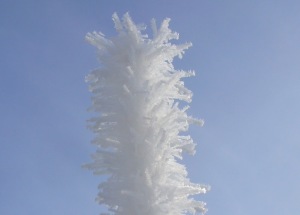 And some mornings, it’s just beautiful when it latches onto the trees… 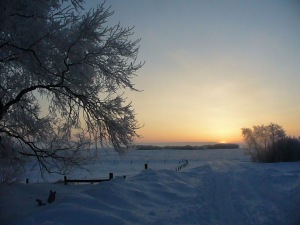 I can’t believe it took so long to sink in that he was there. Sheesh.

Anyway, weather plays a big part of our life here on the Canadian prairies. We have hot, lazy summer days, spring floods and autumn northern lights as well, but ‘tis the season for snow. 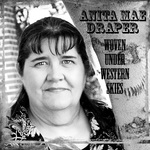 Anita Mae Draper is retired from the Canadian Armed Forces and lives on the prairie of southeast Saskatchewan, Canada with her hubby of 30 plus years and 2 of their 4 kids. She writes stories set on the prairies of Saskatchewan, North Dakota, Montana and Wyoming. Anita Mae has semi-finaled in the Historical Romance category of the ACFW’s 2011 Genesis contest and finaled in the Inspirational category of the 2011 Daphne du Maurier, the 2011 Fool for Love, the 2011 Duel on the Delta and 2009 Linda Howard Award of Excellence contests. You can find her at http://www.anitamaedraper.com/