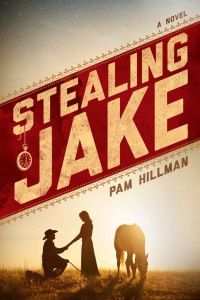 Pam Hillman has been a good friend since we met at the first ACFW conference. I am so happy to be featuring her as part of her blog tour for her debut novel, Stealing Jake.

Pam, can you tell us a little about yourself?
I write inspirational fiction set in the turbulent times of the American West and the Gilded Age. My debut book, Stealing Jake, won the American Christian Fiction Writer’s Genesis contest and was a finalist in Romance Writers of America’s prestigious Golden Heart contest. I live in Mississippi with my husband and family on the family farm. I was born and raised in the country and can’t imagine living in the city.

When you were a child did you have a favorite book or books?
When I was about five, my favorite book was The Kitten Twins, about two mischievous kittens named Twinkle and Boo. For some reason, I didn’t have a lot of books at home, and didn’t learn to read until I started first grade. But I caught on quickly and fell in love with books. One day, our teacher, Mrs. Smith, told us to bring something to school to trade with the other children. I remember taking a small stuffed bear I had gotten on vacation in the Great Smokey Mountains in Tennessee. One of the girls brought the book, The Kitten Twins. Oh, I wanted that book! And I got it. I never forgot that special Little Golden book. I even named my real kittens Twinkle and Boo.

Do you have a favorite genre to both read and write?
I love to read and write historical romance, especially prairie romance and westerns set in America during the late 1800s. I don’t know why I fell in love with that genre and that era. Maybe it was all those John Wayne movies and Gunsmoke episodes I watched as a kid.

Did you have favorite authors growing up who have influenced you?
I cut my teeth on the great western writer, Louis L’Amour. L’Amour kept me mesmerized with his tales of cowboys and Indians, outlaws, prim schoolteachers, hot dry deserts and boom towns.

When did you know you wanted to be an author?
I knew I wanted to be a writer by the time I was 8 or 9 years old. There was a small public library where we checked out books once a week on the way home from school. My brother and my cousins were okay with stopping by the library on the way home from school, but it was the highlight of my week! I checked out the maximum allowed (I think it was 3) and my cousin, Joy, checked out 3 more that I wanted to read. I’m sure I even twisted her little brother’s arm and made him check out books I picked out! lol

How did you go about becoming an author?
As a child, I was fascinated by how authors put all those stories on paper. Somehow, my brain just naturally made up stories. But for years, I didn’t write them down. I tried to get started a few times, but didn’t know how to construct a compelling story with an interesting beginning, firm middle, and satisfying ending. So out of lack of knowledge and fear of failure, I just kept dreaming. I think I had the idea that as long as I didn’t attempt to write, I couldn’t fail at writing. In 1994, I decided that if I was ever going to write, I had to stop kidding myself and get to work. This was before the internet changed our lives, and the first thing I did was go to the library and check out the only book they had on becoming a writer. It was “How to write a Romance” by Kathryn Falk. I read it, picked one of the many ideas in my brain to start writing, and began. Oh, and I need to add that this was when Apple came out with the Apple Macintosh computer. I was a young mother with two children and my mother wanted to give me a gift. She asked what I wanted. I told her a computer. I had a computer science degree but no computer at home. So, now I had a computer so I could write. I’m not sure I would have ever attempted it if I had to write long-hand. Next, the librarian called me one day and told me that a lady was there who was also interested in writing a novel. I left work and we met and chatted for a while. She was a member of Magnolia State Romance Writers of America, the RWA chapter in Mississippi. So, that connection led me to RWA. It was there that I met real, live flesh and blood women who were writing novels and getting them published. At that point, I realized my dream was something I could attain. Someday. Somehow.

If you were not a writer what would you like to be?
I’d own a dusty old bookstore with a winding staircase to a little alcove sitting nook, where I’d offer coffee, tea, and cookies to my guests. It really wouldn’t matter if I actually sold any books. Just being surrounded by them would be good enough!

Besides reading and writing what do you like to do?
I like traveling, just meandering all over the place with no set agenda in mind, and eating at really good old-fashioned restaurants.

Do you have a place you love to visit or would love to visit?
I’ve always wanted to travel overseas. I’d love to visit England, Ireland, and Australia. I’m not fond of the idea of being in an airplane for 10-12 hours, but maybe someday, I’ll get the chance.

If you could have a meal with 3 living people who would you choose and why?
I would say my husband and two sons, but then the boys would bring their girlfriends, so that would be six of us, so that’s too many. But I’d rather hang out with them that anyone. So….let’s see. Only 3? Sigh. That leaves out the Seekers, since there are 15 of us. Seriously, I’d rather have dinner with 3 family members or 3 of my writing friends, or agents and editors at ACFW than a Saudi Arabian prince or a king or the President. The very thought gives me hives. Let me sit around a campfire listening to some ol’ cowpoke nobody’s ever heard of spinning tales about his adventures, and I’m happy.

Finally, can you tell us about your current books and/or any that will be coming out soon. Also where we can find you on the web.

When Livy O’Brien spies a young boy jostling a man walking along the boardwalk, she recognizes the act for what it is. After all, she used to be known as Light-fingered Livy. But that was before she put her past behind her and moved to the growing town of Chestnut, Illinois, where she’s helping to run an orphanage. Now she’ll do almost anything to protect the street kids like herself.

Sheriff’s deputy Jake Russell had no idea what he was in for when he ran into Livy–literally–while chasing down a pickpocket. With a rash of robberies and a growing number of street kids in town–as well as a loan on the family farm that needs to be paid off–Jake doesn’t have time to pursue a girl. Still, he can’t seem to get Livy out of his mind. He wants to get to know her better . . . but Livy isn’t willing to trust any man, especially not a lawman.

And I’m giving away a Kindle in October. Deadline to enter is September 30th.
Kindle Giveaway Link: http://pamhillman.blogspot.com/2011/07/pams-blog-tour-kindle-contest.html

Rose, it’s been a pleasure to be your guest. Thank you for asking me.

Thank you, Pam. I hope everyone will hurry on over to your sites and order your book.

This entry was posted in Pam Hillman, Stealing Jake. Bookmark the permalink.