Eddie Snipes is a member of the John316 marketing network I belong to. I ordered his book a few days ago and started it, but didn’t have time to finish it due to an out of town guests and a funeral this past week. But, what I have read so far is very interesting, and I can’t wait to finish it soon! Please read on to find out more of the Confessions of a Dyslexic Writer. And, as you will see, a very humorous writer!

What made you write I CALLED HIM DANCER? Have you ever danced, taken lessons?

The only dance lesson I’ve received came when I was walking in the woods. A yellow cloud surrounded me and I began swatting yellow jackets like a break-dancer. Upon reflection, I don’t think I had the grace needed to make it big, so I quit after my first lesson. No more bees for me.

The inspiration for I Called Him Dancer came from a song performed by Tralena Walker and co-written by Tom Webster. I attended a meeting at the Atlanta Writers Club. Tralena and Tom were guest speakers. The topic was on how to write a story in lyrics for songs. Not my cup of Formosa Oolong, but at least it was entertaining. After performing the song, “Dancer”, either Tom or Tralena said, “We’ve been looking for someone who will turn the song into a novel. We think it would make a great story.”

Until those words were spoken, I was a passive observer. I looked up and words were swarming around me like those yellow jackets. They attacked my head while I lay screaming on the floor. Okay, maybe I didn’t scream – but my mind did. In an instant, the story unfolded in my mind and I knew this was something I was to write.

I knew nothing about dancing (other than what the bees taught me). Tom and Tralena gave me the lyrics and I started researching and writing. I have to admit that I worried about the dancing scenes, but I knew things took shape when people began asking how I became so knowledgeable about dance. I thought back to the bees and said, “It’s just something that hit me while walking in the woods.”

Have you always wanted to be a writer?
When I was a child, I got my first book. I flipped through the pages, then tore it apart. I didn’t know it at the time, but that’s exactly what you do when editing a manuscript.

I hated writing when I was younger. I only did what I had to do, and sometimes not even that. Writers block was more like writers dementia. My mind didn’t return to me until after… hmmm. What were we talking about?

In 1998, I became active in prison ministry. Many of the men I ministered to were eager to learn. Someone asked me if I had my studies or notes on paper. I agreed to write out the next study and then my writing career was born. The problem wasn’t that I couldn’t write. It was that I didn’t have something to say. Or didn’t realize I had something to say. Over time writing transformed from a task to a passion.
Tell us a little about your book, I Called Him Dancer.
For a moment, Michael danced on top of the world, but one bad choice turned his life upside down. The once promising Broadway star now washes windows for tips and lives among the homeless. When his former dance partner recognizes him behind the fray of whiskers, shame drives him away from her. Angry at God and the world, the Dancer refuses to allow anyone into his life. When everything is stripped away, three things remain: faith, hope, and love. The greatest of these is love.

I Called Him Dancer is a story about how one woman’s enduring faith and unconditional love drives her to reach out to a homeless friend who has given up on life.

Who is your favorite character in I CALLED HIM DANCER?
The character that inspired me the most is Kenyon. Many readers have stated the same. He’s human, struggling to do what is right, and lives by a genuine faith. At times he wrestles between what he knows God wants him to do, and what he wants. Kenyon is down to earth, not preachy, yet his life has an impact on others.

In the story I tried to present Christianity in an honest light. Many who claim to be Christians show hypocrisy and drive others (like the Dancer) away from the faith. This is a real problem in the Christian culture. Kenyon shows what sincere faith looks like. He’s far from perfect, but his simple faith impacts those around him. Kenyon’s sincerity is something the Dancer can’t understand and it piques his curiosity.

What would you like your readers to take away from this novel?
I want people to look at the reality of how faith impacts the world around us. Hypocrisy is being pretentious about faith, and there is a difference between failure and hypocritical behavior. Christians shouldn’t feel dejected when they fail. It’s part of this life of reaching upward.

Also, we all know someone who appears hopeless and hostile toward God, but we don’t know what the Lord is doing behind the scenes. Ultimately, hope is what everyone should take away. Hope that readers are not alone in their struggles. Hope that our lives can make an impact – even with our imperfections. Finally, hope that the people we care about are never out of God’s reach.

How can readers get in touch with you?
You can flash a light on the clouds that says, ‘Free chicken fingers,’ and I’ll play Batman music and come running. Some people prefer the simpler route of connecting with me on Twitter @eddiesnipes. My facebook username is eddiesnipes. It might seem like a strange coincidence, but my LinkedIn name is also eddiesnipes. Even more crazy is my website: http://www.eddiesnipes.com/. On each of these, I just closed my eyes and typed out random letters. I might have peeked on a few letters. 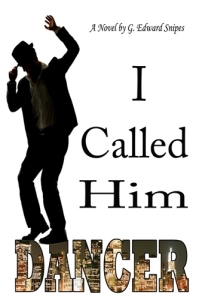 You can get Eddie’s novel I Called Him Dancer for only 99 cents at http://www.amazon.com/I-Called-Him-Dancer-ebook/dp/B004ISLPUE/

This entry was posted in Eddie Snipes, I Called Him Dancer. Bookmark the permalink.