Friday with Friends–guestblog by Ane Mulligan 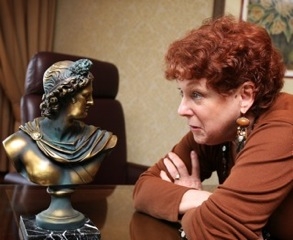 My readers are certainly in for a treat today. Our guestblogger is the lovely, zany (as evidenced by her photo!) Ane Mulligan. Ane and I met at an ACFW conference several years ago and have been friends ever since. Of course, I don’t know anyone who meets Ane who doesn’t claim her as friend. Her engaging personality attracts friends like a bird feeder filled with red sugar does a hummingbird. Could it be the red hair? I know you will enjoy and learn from her article below, and I hope you will also check out her bio and the websites listed at the end of the article to find out more about Ane.

Bio: Ane Mulligan writes Southern-fried fiction served with a tall, sweet iced tea. While a large, floppy straw hat is her favorite, she’s worn many different ones: hairdresser, legislative affairs director (that’s a fancy name for a lobbyist), business manager, drama director and writer. Her lifetime experience provides a plethora of fodder for her Southern-fried fiction (try saying that three times fast). She’s a humor columnist for ACFW’s e-zine Afictionado and a featured blogger on Suwanee Patch. She’s published dozens of plays and numerous articles and won several awards in contests for unpublished novels, including a three-time Genesis finalist. A past Board member of ACFW, she’s mom, a grandmom, and resides in Suwanee, GA, with her husband and one very large dog.

Maybe I should have called this NO Plot via Motivation. Have you ever had a character that refused to talk to you? I have. I’m dealing with her right now. I’m in the second book of a series.

This character, Lacy, was in the first manuscript. She’s the sister of another character in my small fictional town. My “plan” was to have her story the main plotline of the second manuscript.

In the first novel and through the main POV characters, I set-up Lacy’s personality … or at least what I’d gleaned from her character analysis. I use a fairly detailed character interview, including the GMC (goal, motivation, conflict) and the lie the character believes about herself.

In the first manuscript Lacy played a very minor part, so I didn’t dwell on her GMC. All I needed to do was let the reader know she was shy, hardly ever spoke, and was plain (and I don’t mean Amish).

Lacy is the invisible kind of plain. I wanted a person other people overlooked. The kind who could be at a party and no one remembers them being there. Interestingly enough, her husband is cute, the boy next door. And he adores her.

I finished the first manuscript having set-up Lacy exactly as I planned. In the second one, she and her sister would both play POV parts. I went through their character analysis sheets and expanded them for POV.

What I discovered changed everything. First of all, I thought these sisters were close, since Lacy’s sister, Lydia, had moved after the death of her husband, to be closer to Lacy. Ha! I found deep-seeded animosity between them, stemming from their childhood. Was I shocked!

Lydia was easy. She’s open and shared her life with me. Lacy? She clammed up. So much so, I realized she wasn’t ready to be a POV character.

I changed the second manuscript’s plot and POV character. Lacy will play an increasing part in this one, and it’s my hope I’ll discover more of her motivation. That’s what has me stuck. I know what she wants, I know her conflict, but I don’t know her motivation.

At first I thought perhaps I’m not far enough along as a writer to write a character that is so far removed from me. After all, I’m not remotely shy. Well, maybe a tad in certain situations. Oh, come on, I can be shy. But not as shy as Lacy. While we always grow as writers, I’m still fascinated by Lacy.

I’ve decided to forge ahead, even though I can’t figure her out … yet. However, I took a course, “Plotting Via Motivation” by Laurie Schnebly Campbell (LaurieClass-subscribe@yahoogroups.com). That link will subscribe you to her class schedule only. She told me, accompanied by a chuckle, that she’d looked forward to playing counselor to Lacy.

By the third day into the course, I hollered, “Eureka!” I found her motivation. I highly recommend the course. I’m hoping we can get her for an EB at a conference one of these days.

This entry was posted in Ane Mulligan, Fridays with Friends. Bookmark the permalink.