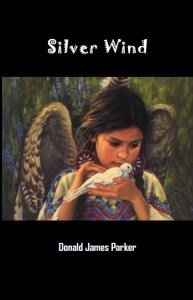 Fridays with Friends– by Donald James Parker
Can you picture John the Baptist as novelist? If so can you envision him wiping the residue of honey and locust intestines on his suede pants and grabbing a bone he scored from one of his frequent wild animal kills and scratching out a cozy little romance onto parchment? How about a head spinning mystery which takes more twists than a pretzel going down the toilet? Are you having equal trouble visualizing him sitting in the Goat’s Milk Café signing his autograph onto his newly printed comedy manuscript? You almost ROFL at the suggestion of the prophet of all prophets stepping out of character to indulge the world in make believe stories. John the B. had one purpose in life. His role was to prepare the way of the Lord. Some people probably consider him excessively fanatical. He just kind of lost his head with that repentance kick he was on.
Jesus spoke in parables. Those are not exactly novels, but they do embody the concept of telling make believe stories which contain an object lesson about real life. Let’s take for example a parable that most kids hear from those endowed with the privilege of teaching them how to live. There was a little boy who cried wolf, even when there was no wolf. And so when a real wolf came to dine on the boy’s flock, no one would believe him that he was under attack by El Lobo, leading to one sad little boy. He was sheepless in Seattle. The object of the story was to teach people not to lie, not by telling them to avoid lying but by graphically demonstrating the consequences of the deed. Human beings don’t typically learn not to do something because someone tells them not to do it. How many of us were told not to touch the iron or a toaster? How many actually refrained from reaching up their grimy little paws to find out why? My estimate is about 20 percent. I think they all watched a brother or sister squeal with pain and learned their lesson vicariously, but again by experience and not through a verbal command. God had already given us the Ten Commandments. Jesus motivated people to heed those commandments through the stories he told.

No doubt you’re wondering where I’m going with this. In 2006 I woke up at 2:00 AM with the distinct sensation that I had heard a voice saying “Write a book about evolution.” I rolled over and went back to sleep. The next morning I went to the Lord in prayer asking, “Did you ask me to write a book about evolution last night?” As clear as a bell, I heard a still small voice in my head say, “And when you’re done with that, I want you to go after Harry Potter and the sexual revolution.” In an instant I was called from being a carefree Christian, or perhaps Sleeping Saint is a better term, to SuperAuthor, getting up at 4:00 AM to polish off a chapter of a parabolic novel before going off to work to earn my daily bread. The result of my frenzied activity was nine books over a three year period. The nature of my commission was similar to John the Baptist. I felt compelled to make a case for holiness and intimacy with God, his son Jesus, and the Holy Spirit through stories that I tapped onto my computer keyboard.

No doubt this has been the most bittersweet experience of my life. It has been wonderful to bring to life ideas that had simmered on the backburner of my brain since my youth and others that I’ve cultivated over the years of following the Lord. However trying to get this literary medicine to those patients who need it has been extremely frustrating. You read about the attitude of the people in the old days towards those poor souls who God shanghaied into service. They would have been the first one voted off the island in a game of survivor. When everyone else in the family was invited to a party, their invitation would conveniently be misplaced. You get the idea. So here I am, feeling like I’m trying to sell cod liver oil to chocolaholics. People want to escape from reality, not have it rubbed into their noses. Marketing books is a tenuous activity in this day and age when a million new books hit the street every year. That statistic staggers my imagination. The struggle to interest readers to put aside their fluffy entertainment to dive into my creations which exhort people to embrace Jesus and obey the commandments is truly mission impossible. At one point I was convinced that I might become the first person in history who wrote more books than he sold. That won’t happen now. I’ve got a few more in me, and then I’ll be done with the printed word. I’m going to make movies which nobody will want to watch instead. Of course, when the world slides into tribulation, my books and movies might shine through darkness and point the way to Jesus. And then, like John the Baptist, I’ll have fulfilled my commission. The trials of this life will pale in comparison with the eternity that hopefully some of my readers will enjoy because they did undertake the adventure of reading the message that God has placed within me.

In case any of you is looking for a meaty reading experience instead of chocolate milk, at least for a change of pace, check out my website at http://DonaldJamesParker.com There you will find my humble and unimpressive covers that house my attempts to fight against evolution, the occult, and sexual sin. If you’re a parent looking for something to entertain but also educate your children in the ways of the Lord, perhaps you’ll be motivated to check further.

This entry was posted in Donald James Parker, Fridays with Friends, parables. Bookmark the permalink.