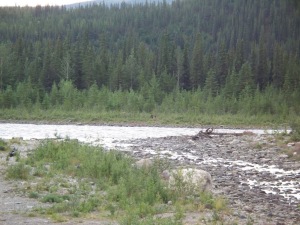 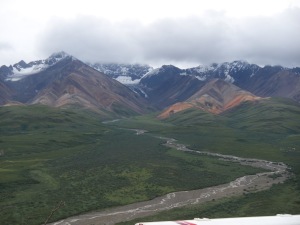 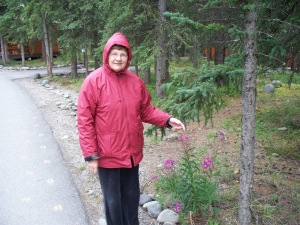 Early the next morning we had breakfast at the lodge then loaded a bus for our 7 hour Tundra Wilderness Tour. We had hoped to see Mt. McKinley, aka Denali, the highest point in the US, but every time we got close the clouds were too low. We did get pictures of several other mountains with snow-covered peaks, though.

Although we saw several kinds of wildlife from the bus–moose, sheep and bear, none were close enough to get without a high powered zoom which our camera does not have. But, we did enjoy the beautiful scenery. The picture of me pointing to a flower is of Alaskan fireweed which is used as a harbinger of winter, kind of like the wooly worm is used to predict a cold winter in Kentucky. In Alaska, they say when the reddish fireweed blooms all the way to the top of the stalk, summer is over, and winter is near. It still had a few inches to go when we were there in late July.

When we got back to the lodge, since it was still bright daylight we took another walk and actually saw two bears across the river from our cabin. We wanted to get closer for a better picture, but the park employees advised against it, so you will have to settle for this picture of one of the bears (the brown smudge) eating berries in the brush! (to be continued.)