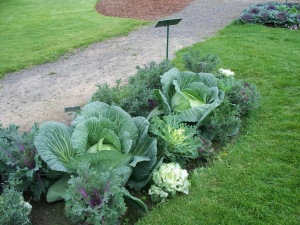 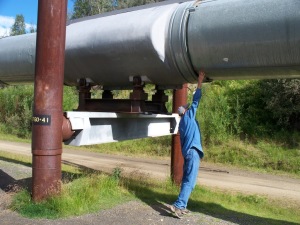 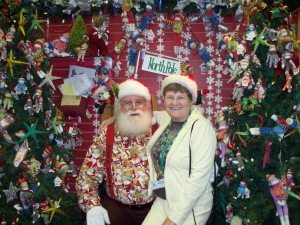 In the morning, our tour bus took us to Fairbanks University where we got to see their experimental gardens and took a hayride around the farming area of the campus. The Fairbanks area has 22 hours of daylight in July, (and only 2 hours of sunlight in January!) so although their growing season is only 3 months long, it is very intense, allowing them to grow cabbages that weigh over 100 pounds and the most beautiful flowers you could imagine!

Next we stopped and checked out the Pipeline. My husband is over six feet tall, and he had to stretch to reach the underbelly of the pipeline in this area, but about 100 yards from there, the pipe went underground. We were told that about half of the pipeline is buried underground. Here is some info I found online about it. The 800-mile-long Trans Alaska Pipeline System (TAPS) is one of the world’s largest pipeline systems. Starting in Prudhoe Bay on Alaska’s North Slope, TAPS stretches through rugged and beautiful terrain to Valdez, the northernmost ice-free port in North America.

On our way to Denali National Park we stopped at North Pole, Alaska, so I had to have my picture taken with Santa to show the grandkids! Then we headed on down the highway and arrived at Denali just in time to see a very entertaining show about Alaskan history at the Cabin Night Theater. The delicious food was served roundhouse style. Afterwards, even though it was almost nine o’clock, it was still bright daylight so we settled into our cabin then walked to the lodge and back.