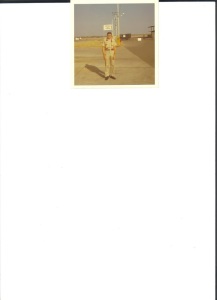 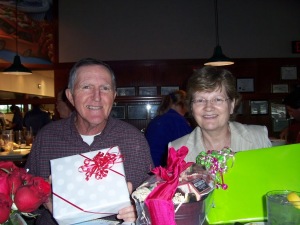 A big salute to my favorite veteran–my husband, my hero, SSGT Chester Wells McCauley
Chester joined the US Air Force in January, 1969, after our marriage in May, 1968. (The first picture is of Chester in his Air Force uniform–tip from Dale McCauley–click on the picture to enlarge it; the second picture is of us on our 40th anniversary!) He then left for his basic training at Lackland AFB, Texas in April, 1969. I remained back in KY teaching school while he finished his basic and moved to Denver CO for more training. I joined him there in June, and we lived in a basement apartment within walking distance of the base. We left Denver in Sept. for a visit back to KY before arriving at his tech school training in Wichita KS, in October where we also lived in a basement apartment. When he completed his training there in Feb, 1970, we went back to KY for a month’s leave before he shipped out to Thailand in March. While in Thailand, he served at Tahkli AFB and Khorat AFB. This was during the height of the Viet Nam war, and he worked many 12 hour shifts, 7 days a week. He was often so tired that he was able to sleep on the concrete on the airstrip when he had the chance!
Chester was on the Lead Crew as a weapon’s mechanic, which meant he trained and certified other crews to load the bombs on several planes to fly from Thailand into Viet Nam.
He returned home from Thailand in January, 1971, and after another month’s leave in KY, went to his next base at Myrtle Beach, SC. Both of our homes there were on the lower level of small shared houses, but they were only 2 blocks or less from the Atlantic Ocean! I joined him there and was hired to teach school at Conway Elementary. He did have to go to a base in Louisiana for 2 weeks once, but everything was going great until he got orders to go TDY (temporary duty) back to Thailand. He left in October, 1972.
Since his group wasn’t supposed to return until April, but his date to be discharged was April 1st, they told him and another guy they could go back to the States if they could be ready to leave in 1 hour, so they did it! I didn’t even know he was on his way until he called me from California to say he was on American soil! I was so happy to know he was back safe and sound and even sooner than expected, but I told him there was a problem. An ice storm had hit SC and most of the south. Our electricity had been out for several days, schools were called off for the week, and I doubted he could get a flight anywhere near Myrtle Beach. He told me not to worry–he would make it. He did–3 days later after getting a flight to Atlanta, then taking a bus to North Carolina, then renting a car with 3 other GIs wanting to get home. Since he was the only one over 21 and able to rent a car, at least he got to drive while the others had to shovel snow and push the car out of drifts! They spent two nights sleeping on the floor of homes of two of the guys. Then, while I was watching the return of the POWs on TV, he finally knocked on the front door! My prayers had been answered!
Chester was discharged on April 1, 1973, and in June (after my school year was completed) we returned home to KY and he was finally able to get back to what he had always wanted to do–farm! He is still farming today, and we still live in the house where we moved in June, 1973, where we raised our three children.
As you can tell from my story, we spent our first three anniversaries and several Christmases apart, but we have both agreed that the years we spent while he was in the Air Force held many good experiences for us. We would move to a town, knowing no one but each other, and had to work together to find a place to live, a church family, me a job, etc. We had to learn to depend on each other and the One who always travelled with us and lighted our path.
So, on this Veterans’ Day, I want to thank my special veteran and all our veterans and current service men and women and their families who have sacrificed so much, and especially our God who has blessed us all so richly. May God bless America!
This entry was posted in Air Force, Chester McCauley, Thailand, Veterans' Day. Bookmark the permalink.