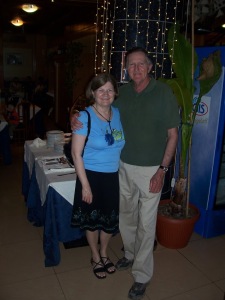 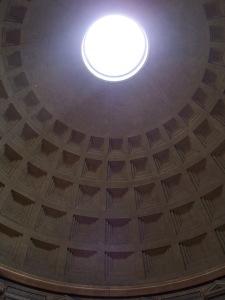 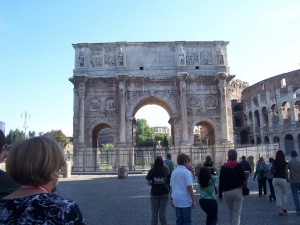 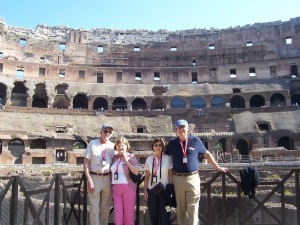 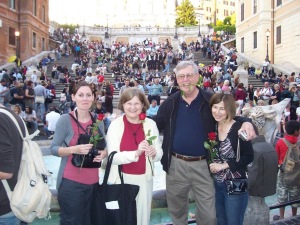 Arrivederci, Roma!
This month has held several celebrations including my 100th blog post (see May 1st post) and my 41st wedding anniversary on May 11th. It also held the second crashing in the past three months of my four year old computer. It would not turn on at all last week, but I am very thankful for a young neighbor who was able to save almost all my files and finally has my new computer up and running so I can post this.
The first night we arrived in Rome, we took a bus to see the Trevi Fountains and the Spanish Steps. My hubby took this picture of me, Kathy and Dave, and Louise, a new friend from Australia whom we met on the tour, in front of the crowded steps. We all are carrying roses and Dave even has one in his teeth! A street vendor “gave” them to us, then took some back when we didn’t offer him as many Euros as he’d hoped!
Another picture above is of my hubby and me with two of our best friends, Kathy and Dave, who were celebrating their 25 anniversary on this trip, also. We are standing in the Colosseum where we could still smell the dried blood of those slaughtered in this arena almost two millenia ago. The Colosseum held up to 55,000 spectators at one time. I just finished reading A Voice in the Wind by Francine Rivers which contains several scenes of fighting in this same location. I highly recommend this book and any book by Francine Rivers, BTW. She is one of those very talented Christian writers who successfully writes both historicals and contemporary stories. She also has published several Bible studies that are great.
You can find the old mixed with the new on almost every corner of Rome. The triple arches are the Arch of Constantine. The picture of the hole in the top of a building with the sky shining through was taken inside the Pantheon. Our very knowledgeable guide, Salvatore, said this massive structure would not have been able to hold together without collapsing upon itself without the hole.
We also toured the Catacombs, but they didn’t allow any pictures there. We were allowed to shoot photos inside the Vatican and Sistine Chapel as long as we didn’t use flash, so my pictures taken there are not very clear.
We celebrated Mother’s Day and our last night in Rome by eating with our friends at a local Italian restaurant. I ate delicious eggplant and some ravioli and a caramel dessert. The picture at the top is of my husband and me taken at that restaurant.
Next on to Venice, but that will have to wait for a few days. I’m off to Chicago on Tuesday, June 2nd for the Write to Publish Conference. Prayers are much appreciated, and perhaps I’ll see some of my readers there! Let me know if you read this blog.

This entry was posted in anniversary, Italy, Rome, WTP conference. Bookmark the permalink.