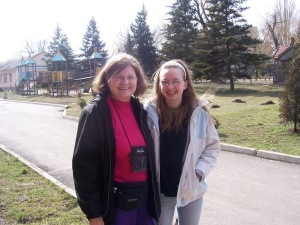 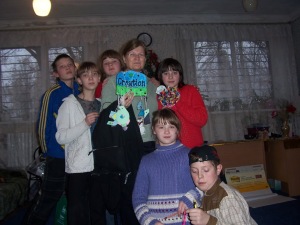 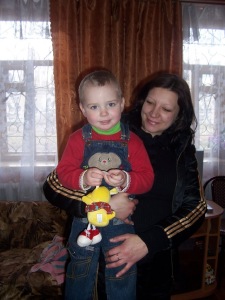 Kids are kids all over the world
I recently returned from a mission trip to the Ukraine with the mission organization known as Goin‘ Fishing. GFM (see more info in previous blog, January 29, 2009) was started several years ago by a man very dear to my heart and the hearts of many others, including my family. Bro. Earl Mullins was the principal of Portland Christian School, my Alma mater, for many years. After he retired, he started GFM so he could “Go Fishin” for men! And he did, in many places around the world, with an emphasis on Russia. Since Bro. Earl’s death in 2006, Paul Kitzmiller has led Goin‘ Fishing Ministries and the mission trips. He and his wife lived in Russia off and on for over three years.
Our team was composed of Bro. Paul, his wife Virginia, a lady from Sellersburg, IN, Libby McMahan, and my neighbor and friend, Joan Marsh. God truly blessed this trip with financial support and much prayer support. We thank all of those who shared those blessings with us so we could pass on the blessing to the Ukrainians, and receive a rich blessing ourselves.
We had many eye-opening experiences and met many fine Ukrainian Christians, but as a former elementary teacher and mother and grandmother, the best part for me was the interaction with the kids!
I have been given the opportunity to travel to several countries, and I can truly say that “kids are kids all over the world.” The Ukrainian children were no exception. Their smiles lit up the rooms and our hearts.
Much of our work was with about thirty sixth and seventh grade students at the Rainbow Orphanage outside Donetsk. The children swarmed around us when we arrived, and met us at the door or on the front porch on following days. We divided into three classes. I taught the Bible lessons while Joan did skits that emphasized the theme of the lessons, and Libby aided the students in making crafts that also correlated with the Bible theme. At the end of each hour, the students rotated, while we teachers stayed in the same room and taught the same lesson three times each day. Kind of a mini-VBS!
Our overall theme for the week was God’s love–using stories of God’s creation, Adam and Eve’s sin, and Jesus’ birth, death, resurrection and ascension. Our team was pleasantly surprised at how much Bible knowledge the students already possessed, and we pray that as they remember the lessons we shared they will internalize and accept God’s love and salvation into their own hearts.
On the last Saturday of our time there, the kids were treated to an outing at the Circus. Although we did miss seeing the circus through their eyes, due to the tickets being for the wrong date, we were very happy the circus manager made it possible for the kids to experience it, and we did get to hear about their favorite parts later when the children were brought to a Ukrainian church for a meal and treats. They also performed a concert for us, displaying their talents at singing popular songs and Scripture songs.
The one thing different about these children compared to American children is that when the meal was finished, the kids immediately stood and began clearing the dishes from the table, an example American kids should emulate! I even have the picture to prove it! (see first picture above.)
We met several children at the three churches we attended, including the young boy shown with his mother above. I also had the opportunity to speak to the 8th graders at the Christian Day School on the campus of Donetsk Christian university where we stayed. All of the Ukrainian children spoke much more English than I could speak Russian! The picture of me with a pretty young teen girl shows one of the students I met at the Christian school who came to tell me “good-by” or “Das Vadanya” on the day we left.
I miss the children and pray for them every day. I hope you will join me in prayer for these orphans and all those who work with them–orphanage employees and local church groups who visit and teach them weekly. And I encourage anyone who has the opportunity, to open your hearts to the possibility of taking a mission trip to the Ukraine or where ever God leads you.
This entry was posted in Ukraine mission trip. Bookmark the permalink.