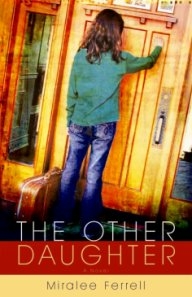 Preview of Blog Tour for Miralee Ferrell
I’m one of several bloggers who are taking part in a blog tour for new author Miralee Ferrell. Stop by on Tuesday for an interview with Miralee about her book, but here’s a teaser below to pique your interest!
The girl standing at the door took a deep breath, pulling her suitcase a little closer to her trembling legs. “My mama’s dead. He’s my daddy.”Susanne Carson knew that she could trust the love of her life—her husband, David—until she discovered a strange, unkempt young girl on their doorstep, claiming to be David’s daughter.Not that their marriage had ever been perfect—David’s decision to embrace the Christian faith had strained their relationship. Susanne may not have agreed with his beliefs, but at least she trusted him. Had David been hiding this not-so-little secret from his past? He wanted Susanne to believe in his God, but believing hadn’t done much to keep David out of another woman’s arms.As David confronts the truth of his past, Susanne must face her own moment of truth as her marriage is taken to the breaking point and the life of one young girl is left in her hands.

The Other Daughter just released, look for it in Christian bookstores near you, or order from http://www.amazon.com/ or http://www.christianbook.com/ If you visit Miralee’s website and sign the guest book, you’ll be entered in a drawing for a free book.