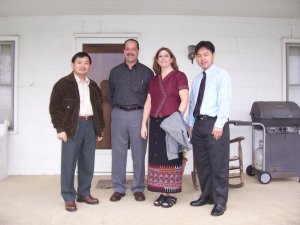 As a writer I have heard many times not to use co-incidences in my stories as that makes them unrealistic, and I don’t really believe in co-incidences, but I have had many events happen in my life that can only be explained as God-incidences. I started thinking about this because of the guests we hosted this weekend shown in the picture above. From left to right they are Danai Chowwiwats, John Johnson, Ann Johnson, and Somphet Krongmadee.

We just met Danai and SomPhet yesterday, but felt an immediate bond with them due to their Christian spirit and because they are from Thailand where my husband spent two tours during the Viet Nam war.

We met John and Ann almost fifteen years ago when they moved to KY and bought a farm near ours. They soon became Christians and went to Russia shortly thereafter to pass out tracts in the subway stations. When they returned Ann called me up and said they had met a friend of ours over there–Bro. Earl Mullins. Bro Earl was the minister who had married us in 1968, and he was in Russia to look at some mission opportunities. He and John were stacking Bibles/books one day and one of them said it reminded them of a guy they knew who stacked his hay bales like that. The other one said they knew someone back home that did that also. A few days later they started talking about where they lived and John said he lived outside a small town in KY that Earl had probably never heard of named Cynthiana. That’s when Bro. Earl informed John that he knew Rose and Chester from there and that Chester was the farmer he had talked about who stacked his hay bales. John said that we were neighbors of his and that Chester was the guy he knew who did that, too! We are very glad that they got to meet and know Bro. Earl who recently went home to be with the Lord after faithfully serving Him for many years as a Christian school teacher, administrator, and missionary.

John is a printer by trade and he and Ann have formed a ministry named Gutenberg Ministries to print the Bible and Christian literature in many languages. They have travelled in several countries and even lived in Guinea for a year. Another God-incidence occurred a few years ago when they contacted us to tell us they were going to Africa soon and said they needed to contact a missionary who was currently at home on furlough, but they didn’t know how to do that. When John told me the missionary’s name, I said “He is spending the weekend with us, so why don’t you come and visit him while he is here?” He did, and gleaned many helpful bits of information from this veteran missionary that aided in his trip.

We have other connections with the Johnson’s also–their son JD (now 16) was the ringbearer in our daughter’s wedding over ten years ago. We were happy that they could spend the night with us while in for a church missionary day before attending the national missionary conference in Indianapolis next weekend. They brought Danai and Somphet with them because they are now partnering with them in Southeast Asia Christian Mission (SEACM, pronounced Seek’em). They will also be the American contacts for this organization. So anyone wishing to support this work among the Hmong people in Thailand or wanting more information about it or the printing ministry can contact the Johnson’s at GutenbergMinistries@Yahoo.com.

How about you–would you like to share any God-incidences of people God has brought into your life so you can better serve Him?