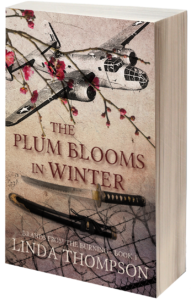 I love this cover of The Plum Blooms in Winter by Linda Thompson. It shows the beauty juxtaposed with the danger and horror of life during WWII in Japan. I just finished reading this book and LOVED it! Although there are some disturbing themes, they are very true to life in Japan during this time period. And they tell a story of forgiveness and redemption for both of the main characters–Matsurra Miyako lives a charmed life until the bombing of Japan. Then every thing turns sour for her, especially her bitter and fearful heart, until she is finally released from custody to her brother who tells her of the Christ.

US Pilot Dave Delham helped dropped some of the first bombs on Japan before being captured and held in terrible conditions in a POW camp in Japan for over three years, so he also has much anger and unforgiveness in his heart until God touches him in that very place.

I hope you will order a copy of this book to find out all the details and let your heart be touched also by how God can work miracles even in the worst of situations. Highly recommend! And I can’t wait for the next one in this series! 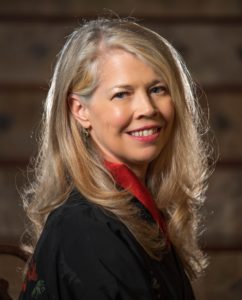 what she loves–stories where reckless faith meets relentless redemption. Her debut novel, The Plum Blooms in Winter, is an A.C.F.W. Genesis award winner. Linda writes from the sun-drenched Arizona desert, where she lives with her husband, a third-generation airline pilot who doubles as her Chief Military Research Officer, two mostly-grown-up kids, and a small platoon of housecats. When Linda isn’t writing, you’ll find her rollerblading–yes, that does make her a throwback–taking in a majestic desert moonrise, or dreaming of an upcoming trip. She and her husband recently returned from a tour of Israel and Jordan and a visit to Wales. Next up: Seattle and Charlotte.

BOOK BLURB FOR THE PLUM BLOOMS IN WINTER

“A taut, crisp debut achievement that colorfully evokes the Pacific theater of WWII. Start this one forewarned: it’s a stay-up-all-night read.”

A Prostitute Seeks Her Revenge–In 1942, Miyako Matsuura cradled her little brother as he died on the sidewalk, a victim of the first U.S. bombing raid on Japan. By 1948, the war has reduced her to a street-hardened prostitute consumed by her shame.

A WWII Hero Finds His True Mission–Dave Delham makes military aviation history piloting a B-25 in the audacious Doolittle Raid. Forced to bail out over occupied China, he and his crew are captured by the Japanese and survive a harrowing P.O.W. ordeal. In 1948, he returns to Japan as a Christian missionary, determined to showcase Christ’s forgiveness.

Convinced that Delham was responsible for the bomb that snuffed out her brother’s life, Miyako resolves to restore her honor by avenging him–even if it costs her own life. But the huntress soon becomes hunted in Osaka’s treacherous underworld. Miyako must outmaneuver a ruthless brothel owner, outwit gangs with competing plans to profit by her, and overcome betrayal by family and friends–only to confront a decision that will change everything.

This entry was posted in Uncategorized and tagged historical fiction, The Plum Blooms in Winter. Bookmark the permalink.