Rose here: don’t forget to go to the bottom before you leave and read the great Giveaway Betty has. I wish I could enter after reading this great blog! 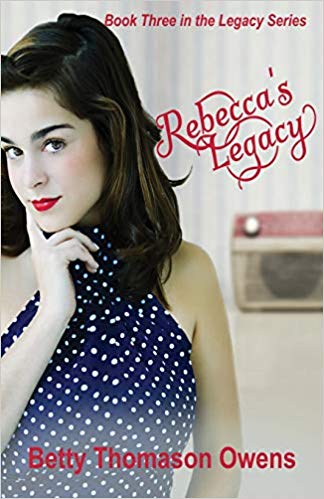 Amy Juliana Emerson was born in the spring of 1929, just a few months before the stock market crashed. She was born in Amelia’s Legacy, Book One of the Legacy series. As the author, I knew she was going to be special, but I didn’t know she would one day become my favorite character among all those I’ve created.

Amy is a beauty. She has her mother’s dark hair, but she inherited her father’s smile with a dimple in her cheek. She was destined to be a daddy’s girl.

In Rebecca’s Legacy, Amy comes of age. It’s 1947, and most of the world is still recovering from World War II. Her older brother, Nate, had been a POW in the South Pacific. Amy hadn’t seen him is nearly three years. Nancy Sanderson, Amy’s mother, is a successful writer of teenage mystery novels, and Dad is head of an immense business empire.

Amy is graduating high school, but just barely. Unfortunately, her grades suffered the last year, while she was dating Thad Greene, their high school’s football star. In typical teenage fashion, she chafes against her parents’ authority and decides that Amy knows best how Amy should live. (Anyone who has read Amelia’s Legacy may think this sounds familiar.) Yes, she’s a lot like her mother.

Amy is an American princess, very much in the limelight. All of Springfield has witnessed her humiliation and near failure. Now, they watch as she submits to her dad’s authority. What will happen to this willful girl with the sullied reputation?

Yes, Amy agrees to Dad’s plan but all the while, she’s laying plans for a complete break from the famous Emerson clan. One she hopes will end with her freedom, once for all. Her plan might have succeeded, if it hadn’t been rudely interrupted by a—oh, wait, I can’t tell you that—it would spoil the story!

I can tell you a bit about Matthew (Matt) Wordsworth, though. The young man her dad hired to accompany Amy to Aunt Rebecca’s farm caught onto her in short order. This girl is a princess who needs a “set-down.” Matt has no doubt it will happen at some point and he secretly hopes to be present when it does.

I love this book. I was captivated by its young heroine from the moment she began her self-motivational chanting that ends with, “be a queen.” She uses it to reset after a troubling circumstance. She also uses it when she needs to make the best possible first impression.

Amy may be down, but don’t count her out. She may be on the wrong person’s radar in imminent trouble, but the Emersons have a backup plan.

I loved writing Amy’s story. She’s unpredictable and a bit of a firecracker, but she’s vulnerable, too. Her character surprised me at times. She had a goodness that worked its way to the top and finally won.

That’s one of my favorite things about writing by the seat of your pants—the unpredictability—it ignites my interest as I write, and keeps me moving ahead, even when I don’t know where the story will take me.

What will it take to teach a spoiled heiress about the greatest legacy? Amy Juliana Emerson might be a cultured debutante, but she’s doing her best to follow her mom’s rebellious footsteps. Her desperate attempt to escape her father’s control, however, comes at the worst possible time.

Robert Emerson has received a threat against his family in an attempt to take over his company, Sanderson Industries. To guarantee his willful daughter’s safety, he sends her to work on a produce farm run by her Aunt Rebecca. Maybe her quiet strength and unconditional love can work on Amy, keep her from becoming the prodigal daughter she seems insistent on being. Matt Wordsworth is the man Robert calls upon to make sure his daughter stays in line. His only interest in the beautiful girl is purely part of his job. Purely. Amy considers him a fuddy-duddy which suits the situation perfectly, allowing him to stay close to her without concern for her losing her heart to him. And his own heart … well, his feelings didn’t matter. This was business. Humiliated and angry, Amy contemplates a path that will lead her even farther from home and away from Dad’s protection. Rebecca’s influence begins to change her feelings about everything, even about Matt, but Amy might find she’s playing into the hands of the enemy. 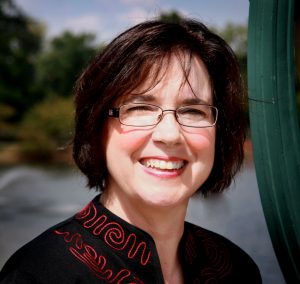 Betty Thomason Owens loves being outdoors. Her favorite season is spring, when she can work in the yard or take long walks while thinking through a troublesome scene in one of her stories. She considers herself a word-weaver, writing stories that touch the heart. She leads the Louisville Area ACFW group, serves on the board of the Kentucky Christian Writers Conference, and is a co-founder of the multi-author Inspired Prompt blog. Married forty-four years, she’s a mother of three, and a grandmother of eight. A part-time bookkeeper at her day-job, she writes for Write Integrity Press, and has seven novels in publication. You can learn more about her at BettyThomasonOwens.com. Connect with her on Facebook, Twitter, Pinterest, Instagram, and at Inspired Prompt.

Betty is offering a copy of Rebecca’s Legacy to one reader who leaves a comment on the blog post. Winner’s choice of either print* or E-book. *Print books for U.S. addresses only, please.

If the winner has already read Rebecca’s Legacy, the winner may select another of Betty’s books. You’ll find those listed at her Amazon Author page. Drawing to be held on Friday, May, 3, 2019 and the winner will be contacted by May 4th!

This entry was posted in Uncategorized and tagged Betty Thomason Owens, Giveaway. Bookmark the permalink.

6 Responses to Rebecca’s Legacy, a Guest Blog by Betty Thomason Owens and Giveaway