I told you we were on a farm tour, and this day was definitely filled with farms of all sorts! We started off at the New Ross Farm Museum where we spent a couple hours learning about farming in the mid 1800’s style in NS. Very interesting and informative! This farm is still being worked with oxen as it would have been during that time period, and we ate biscuits and jelly prepared the old-fashioned way in Rosebank Cottage, built in 1817.  And learned how they made staves and barrels for storing and shipping. 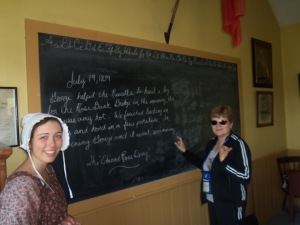 Also got to see an operating blacksmith shop where they shoe 30 teams of oxen each year. And several of our group rode in wagons pulled by oxen. And I got to act like a schoolteacher in a one room school house the children attended back then.

After lunch we went to the Balsam Christmas Tree Farm, a family owned operation that ships trees all across the area and has a huge following of local customers who come out to cut down their own tree each year. And the family even has sent a big tree to Boston for their annual tree lighting ceremony. 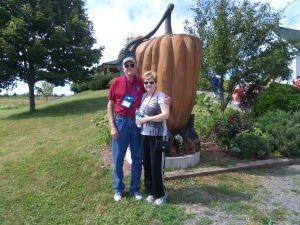 Next was Dill’s Pumpkin Farm where the world’s largest pumpkin was grown–1818.5 pounds! And where hockey began. Then dinner at a neat restaurant named Cocoa Pesto in Windsor where we spent the night. Can you see why I gained two pounds while on this trip?

Hope you will come back to visit next Tuesday to see where we went and what we ate next!