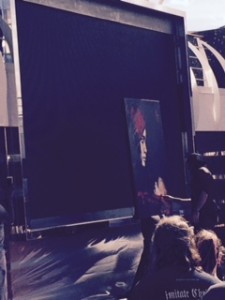 Our last day at sea on Day 5 K-Love Cruise 2016–a time to reflect, tour the ship a little more, spend time with Chester and with Kim and Don. That morning we walked around on several decks, then ended up on Aqua Park Deck to see the talented Jared Emerson paint this picture of Mary looking down at baby Jesus. He even leaps up to paint the high parts with his hands. How he can see it in his mind and then place it just so on the canvas is definitely a gift from God. If you google his name you can find photos of many of his works. 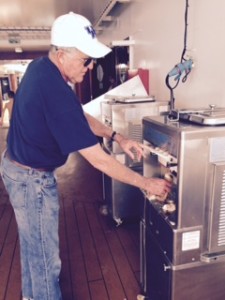 On the same deck was the handy soft-serve ice cream which Chester had enjoyed most days, so he had to stop for one last cone!

For lunch we ate at the same buffet on deck 14, but we decided to change things up and eat at the rear of the deck and watch out the huge back windows where we had been traveling. I took two pics since one shows the people better but the other shows the water better. If this doesn’t inspire you to go on a cruise I don’t know what will. Ocean-view dining! 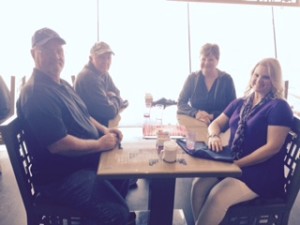 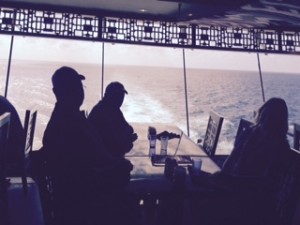 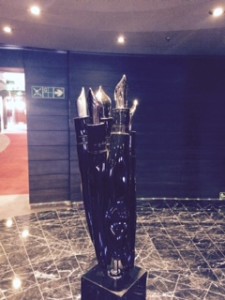 Two more photos–the pen sculpture was a favorite of mine and Kim Vogel Sawyer’s since we both write Christian fiction! The other pic is one last glance at our lovely cabin. This was the fourth cruise we have taken, and this cabin was the largest and most spacious we ever had. The deck alone made it worth paying extra! I hope everyone has a chance to go on a K-Love cruise if they love Christian music and Christian fellowship!